What motivates people to say yes to polio vaccination? For many, the decision is simple—awareness of how close they are to catching polio and what they can do to prevent is sufficient for them to accept the vaccine. We call these individuals, Accepters.

The second mindset is Rejecters. Rejecters are typically a minority of the at-risk population, but they often cluster in communities that provide a supportive social and cultural environment for their disbelief and suspicions about vaccination. In areas with low population immunity, Rejectors can contribute to an outbreak.

Both acceptors and rejecters may also be "mobile." That is to say, they frequently travel to different geographical regions, and are more difficult to effectively reach. Mobile populations must be reached with tailored communications. 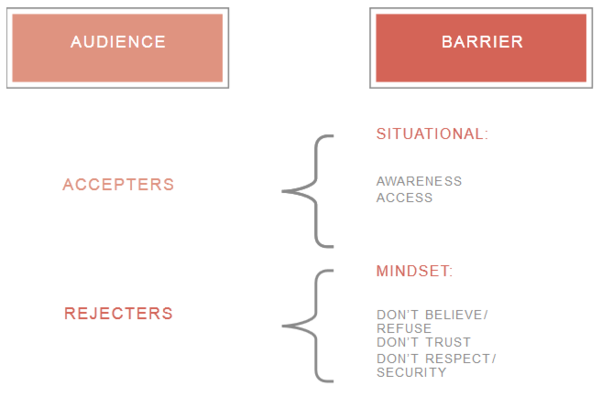 In all countries of the world, accepters constitute the vast majority of people. The decision to vaccinate is simple because they are predisposed to accept vaccines and vaccination is a matter of common sense. This means that initial communications do not need to persuade that vaccination is necessary—they already believe it. Instead, communications can focus on creating awareness of polio and the immunization campaigns.

The Accepter's Journey is characterized by brevity and lack of resistance across the stages that facilitate the health workers' performance at the moment of contact. Awareness, Resonance, and Consideration occur simultaneously, as messages around immunization align to their existing opinions.

Remember, over time, repeated polio vaccine campaigns can begin to test the patience of even the most sympathetic Accepter, and so it becomes important to shift communications to focus on themes beyond just awareness over time.

Rejecters as individuals do not pose a substantial threat to eradication. However, a cluster of rejecters in areas of low population immunity and high virus susceptibility can be a breeding ground for the virus. In some cases, rejecters can be a small number of individuals who have a broad and strategic influence over our target population. Thus, it is important not only to know whom the rejecters are, but also to understand which rejecters are strategically important to focus on.

They are defined by a reluctance to vaccinate their children, or a propensity to discourage vaccination of other children. A different communications approach will be needed for this group.

Rejecter journeys tend to be specific to the local conditions and require a tailored, adaptive approach to communications and media channels.

For example, mass communications that are successful in reaching the majority in a given population may not lead individuals to seriously consider vaccination because they belong to a specific subcultural community, and the communications fail to resonate with their specific cultural values.

Within any polio outbreak, rejecter journeys can become a source of increasing risk as response efforts continue to go on,, especially as vaccination fatigue can cause formerly accepting individuals to reject as well, potentially reducing the base of accepters and increasing those who reject.

With mobile populations, we must consider the best ways we can reach and vaccinate them. Making this happen typically requires physical media at key transit points, and depends heavily on interpersonal communications to succeed with an interaction that involves a caregiver who is typically rushed, unprepared - and perhaps unwilling - to receive a health service at this time, particularly if they have received the same service multiple times before.

Additionally, the motivations behind transit itself should be leveraged to incentivize vaccination. These mobile, potentially displaced groups are cases of "strangers in a strange land," and we have the opportunity to resonate with them if our messages recognize their place of origin, their destination, or their purpose for traveling. Brand familiarity is an important source of trust that should be used in communications at transit points.

Explore the other two learning modules in this 3-step tutorial to design evidence-driven communication strategies to help vaccinate every child.

Integrate communications tactics and understand their strengths and weaknesses, then evaluate performance.

You cannot do everything and your ability to prioritize your interventions and target behaviours is paramount. One simple way to do this is to evaluate importance of the behavior and its changeability.